We're Small but We're Special
​
​Dubbed 'the little library' by generations of patrons, we've long been an architectural gem in historic South Dennis. Visitors from Oregon and Texas, Bulgaria and Brazil stop by just to see what's inside. We often look out a window to see someone setting up an easel on the front lawn. One summer visitor wanted to transport the library with her to Florida. Another visitor  took pictures from every angle so her husband could build a dollhouse. We half expect someday to see a Victorian maiden, white dress and blue sash, suddenly appear to request the latest novel by Louisa May Alcott.

The actual building, dated around 1856, the epitome of 'gingerbread' American Gothic, has every bit as whimsical a history. Like so many other sturdy Cape buildings, it may have been moved from somewhere else. But from where? A campground in Yarmouth? Wellfleet or Martha's Vineyard?

(Maybe it just dropped onto the spot, like Dorothy's house in Oz.)

By other accounts, it was built by its first resident, seaman John Rose--or was a gift from his Captain. Originally only 15X20 feet, with a dauntingly steep staircase leading to two gable bedrooms, after Rose's death in 1866, it became home and business address for cobbler Benjamin Nickerson. Later, Emily Smalle, reputed 'ardent poetess' of South Dennis, and her sister held prayer meetings in their tiny house. In 1918, one of the region's many sea captains, Jonathan Matthews, bought it for the town to use as a library, then bequeathed it outright in 1926. Two years later it was taken over by the newly formed South Dennis Free Public Library Association, Inc, which continues to run it with financial help from the town of Dennis.

The library's growth echoes what had also been the evolution of a new nation. There was no electricity until 1950, and until 1958, one of the librarian's duties was to stoke a pot-bellied stove to warm the building for the few magical hours it opened every week. There was no place to shelve the children's books so they lay invitingly in stacks on the floor. Ethel Hall, who, revealingly of the era, became librarian in 1942 when marriage made her ineligible to continue teaching, remembered fondly her youngest patrons sitting every which way at her feet, carefully choosing the books they wanted to take home.

With circulation increasing, the little library was splitting its seams, so the rustic 'bean pot' cellar evolved into downstairs shelf space, later into our cozy children's room. Gordon Robb, also a key architect in the restoration of Colonial Williamsburg, designed an addition in the early 1960's, complete with 'quatrefoils' (see below) and lacy fretwork to match the roof overhang and the elegant four leaf clover nestling under it.

Today, along with a collection of over 15,000 books and DVDs, including choices for diverse tastes and all ages, we Museum, high speed internet, plus wireless access, Juvenile Graphic Novels, Board Games and STEM Activity kits, and more... all in a pre-Civil War setting!

Our mission is to make sure that nobody leaves empty-handed. 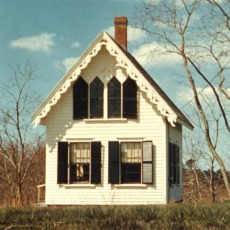